The Transformation Process of the Chilean Army

The Transformation Process of the Chilean Army: Building integrity and legitimacy through the democratization process of Chile

In this blog post, Ricardo Batarce and Lucia Soriano discuss their research on the democratization of the Chilean Army from the perspective of a institution-first conception of public integrity. They argue that the reason the army has been plagued by corruption scandals in recent months is precisely because the robustness requirement of public integrity was not satisfied during this process. 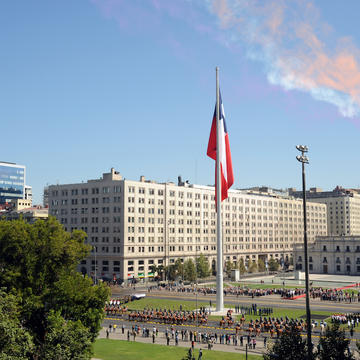 How do we build public integrity and create a better government in the long term? This issue is important for democracy and the construction of reliable institutions for citizenship. Chile has experienced problems of corruption and institutional integrity at different levels. Our case study focuses on using an alternative theory to overcome the weaknesses of the mainstream theories against corruption. Fundamentally, we articulate a theory of public integrity with an institutionalist focus - from the old ‘officer-first’ approach to an ‘institution-first’ approach. Building integrity and reducing corruption are two sides of the same coin. An emphasis on integrity, however, is a better approach.

Our research on the Chilean Army’s transformation tries to understand the variation of integrity in the Chilean Army during the last 20 years. Using this theory, it describes a process of a successful improvement of integrity by the transformation and modernisation process of the Chilean Army. However, it also highlights the extremely negative consequence of not having sufficient strength of the robustness element during this process. This happened because no robust public procurement system, with sufficient oversight and control, was provided for as it is for other institutions of the State. As a consequence, the Army is more vulnerable to acts of corruption than the other political institutions in Chile.

In general, there is a high degree of public trust in the armed forces in people in many countries. Public surveys often show the military among the most trustworthy state institutions. Paradoxically, some studies rate the defence sector as one of the most corrupt, (Transparency International, Global Corruption Barometer 2010, p. 195). To compare, in the last year the Chilean Army has been under the worst storm of corruption, probably since the arrival of democracy in the 1990s. At the end of last year, 21 generals of the high command were forced to retire due to the distrust of the government of President Piñera in his administration. The new high command were anxious to assure that the new generals were totally honest and with impeccable records in administrative issues.

In our evaluation, one of the main reasons that facilitated the fraud was due precisely to this institutional vulnerability discussed above. First, because of the existence of the reserve for the purchase of material and services with funds from the reserved Law of Copper, which meant that it is exempted from the process through Chilecompra. Secondly, due to problems of internal and external army control mechanisms: the lack of a more transparent mechanism for purchasing, as well as the fact that limits the reserve only pertain to those spaces that are necessarily confidential, served to weaken the institution in the long term.

Armed forces play a significant role in any society. The security and defence of the country and its values rests in their hands. Because of this, efforts to build and maintain integrity in the defence establishment are important worldwide for several reasons: First, the budget allocation to the defence sector is usually one of the highest. Second, any case of corruption reduces the capacity of the force, diminishing the operational effectiveness of the Armed Forces. Cases of corruption also constitutes a reputational risk for the troops thus having a negative impact on soldiers’ morale. Third, lack of integrity in the defence sector undermines public confidence in the state. It leads to a loss of prestige and public trust in the military.

The process of institutional modernisation in the Army began slowly with the democratisation of Chile. However, the process of transformation began much later later. The primary objective was to recover the mission and legitimacy of the Chilean Army. In that sense, the governments of the Concertation and the High Command of the Army were effective in reconstructing the purpose and legitimacy of the institution in the new democratic era. The adaptation of the Army to this new era was only possible by undertaking a profound modernisation and transformation. In this sense, the Army experienced its own democratization process.

Starting in 1990, the transition process in Chile to democracy took a long time. The democratisation during the 1990s is known as the time of democracy to the extent possible (Navia 2010) or consensus democracy (Huneeus 2009; Godoy 1999). Those terms derive from the fact that political reforms had a ‘padlock;’ at this time it was usually expected that any kind of institutional reform would require military consent plus ample consensus on the political right. The constitution contained profoundly controversial and anti-democratic elements that were eventually eliminated in the 2005 constitutional reform.

At this time, the Chilean Army lacked a legitimate purpose.  This was not just a theoretical problem regarding anti-democratic prerogatives, but also a practical problem of mistrust. In fact, the very constitutional origin of the Army's mandate lacked any legitimacy during that period. Additionally, General Pinochet and other high-ranking military officers occasionally used their power to pressure or dissuade democratic governments from acting in a certain manner – such as reforming the military pension system. Nonetheless, the pressure was mostly in cases of human rights violations by not allowing the prosecution of militaries or family members of Pinochet.

None of the elements of the institution-first integrity framework were satisfied during the first period of transformation, fundamentally due to the lack of ‘legitimacy of purpose,’ which had a cascading effect. This is crucial because if the institutional purpose is not legitimate, all the other elements lose their validity. In this way, the Chilean Army lacked the necessary conditions to be an institution trusted by citizens.

THE ARMY DURING THE RE-DEMOCRATISATION

However, democracy was ‘formally’ re-established in March 1990. The Army gradually started to comply with the functions of a legitimate Army. We can observe how some of the modernisation and transformational process features agree with the Integrity Theory, as demonstrated in the diagram on the left. 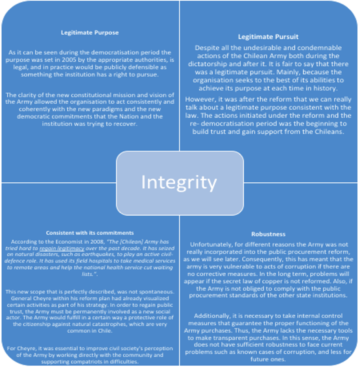 Revisiting Kirby's theory, it is useful to remember that under this model if all the elements of the theory are reached, the grounds for public trust in an institution can be established. In the case of the Chilean Army, that is exactly what we can see after looking at the data. There is strong evidence regarding the results of these reforms, which have been promoted since the beginning of the year 2000. As illustrated in the following graph, confidence in the Army improved steadily since 1998. 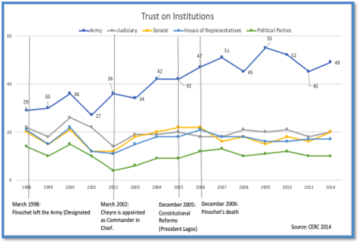 Concerning spending, the Army budget comes from two different sources: 1) The annual budget law discussed in the National Congress; 2) and the funds of the Secret Law of Copper. Regarding the former, budget revenues are used for current expenses and are subject to the law of public purchases (salaries, goods and consumer services for regular operation, social security benefits). Concerning the latter, funds that the Secret Law of Copper grants to finance the maintenance of the strategic capabilities of the army are not subject to the law of public purchases. This pertains to the purchase of military equipment and its associated maintenance such as weapons systems, computer systems, military vehicles, missiles, helicopters, and so on.

In our opinion here lies the highest probability of corruption weakness of the Army as a state institution. In fact, the General Comptroller of the Republic itself stated in the Investigative Commission that "the opacity, coupled with the deficiencies of internal control, favors the appearance of corrupt behaviour."The Chilean Army is not obliged to use the system of purchases and public procurement for all the expenses associated with the budget of the Secret Law of Copper. Therefore, army purchases are opaque beyond reasonable military secrecy, even for reasons of national security. This issue in addition with the lack of institutional control allowed this case of fraud to unfold.

Although the Armed Forces are incorporated into the public procurement system in their current expenditure of the annual budget law, in practice there are too many exceptions of the law of public procurement. The main reason is the prerogative to use for any purchase "the quality of reserve" which make the system extremely vulnerable. Additionally, it is important to notice that there are also certain expenses that are in a ‘grey area’ – such as spare parts of military vehicles that could fit perfectly into the rules of the Secret Law of Copper or the budget law with a minimum administrative astuteness.

In our opinion, fraud could have been committed in any scenario. Because the fraud was carried out by falsifying purchases of repairing parts of vehicles and military tents. Thus, it could have also qualified for the exceptions that the law of purchases indicates for the Armed Forces. In that sense, the Army remains vulnerable to future similar cases until the Secret Law of Copper is reformed or repealed and the exceptions to the procurement system of the Armed Forces are not revised.

The Army is vulnerable to acts of corruption. Mainly because the robustness element of institutional integrity cannot be satisfied without a transparent system of public procurement and robust systems of control. This is key in explaining the current cases of corruption and possible futures if nothing changes in the coming years. Unfortunately, the Armed Forces in general were not the object of these State reforms that have attempted to provide other public institutions with greater legitimacy through transparency and accountability.

Furthermore, high command must be formally sanctioned and reproached politically and socially for not having solved the problems of fraud and corruption in time. It is true that institutionally the Army is weak in terms of mechanisms related to fighting corruption, however this does not excuse the command of their duties of care. They are fully accountable to society, as well as judicial and political authorities. If the systems are not working properly, they must be changed and enhanced because the integrity of the institutions is in risk.

Kirby, Nikolas. An ‘Institution-First’ Conception of Public Integrity. Working paper for discussion at the Building Integrity Workshop. May 2018.

Ricardo Batarce and Lucia Soriano were MPP Summer Interns for the Building Integrity Programme in 2018. This blog has been adapted from research conducted during their tenure with the programme.