Aurora Milroy is a Palyku woman from Western Australia who lives and works on the lands of the Kulin Nation. She is the Advisor, First Peoples Programs and Strategy, at the Australia and New Zealand School of Government (ANZSOG), and completed the Master of Public Policy at the Blavatnik School of Government in 2016.

Most Aboriginal people don’t trust government. After years of broken promises, exclusion, discrimination, and state sanctioned genocide, it’s not hard to see why. I am a Palyku Aboriginal woman, and when I finished my studies I took a job in the public service because I thought that was the best place to make a difference for our mob. Times had changed and I thought I could work within an institution that had historically done us wrong and get it to work in our favour. But once I was in government, I saw that most of the senior decision-makers in Indigenous Affairs were non-Indigenous. I saw how rigid the bureaucracy was, and how much pressure departments were under to deliver things quickly. None of these things were conducive to doing things the proper “blackfella way”. There was no time to work with communities, build relationships, get the process right and arrive at a consensus. Although there are some great Indigenous people in senior positions working to change the practices of government, and although there are some great non-Indigenous people open to learning from our ways of being and doing, I still felt I couldn’t live my Indigeneity in the public service. I didn’t feel at home in the system, and I certainly couldn’t use the system to achieve better outcomes for communities. 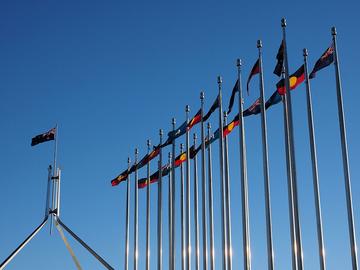 Aboriginal and Torres Strait Islander people should be able to trust government. We should aspire to join the public service and have faith that we can bring our whole selves to work. We should trust that the work we do is culturally sound and will deliver value for our communities. Something has to change in the relationship between governments and Indigenous peoples/communities. Recognition of the need for change is reflected in the increasing debates around treaty, self-determination, constitutional recognition, truth and reconciliation, and a voice to parliament in Australia.

In May 2018, the Australian government announced an Independent Review of the Australian Public Service (APS). In my role as Advisor, First Peoples Programs and Strategy, at the Australia and New Zealand School of Government (ANZSOG), I compiled a submission to the review calling for representation of Indigenous values in the Public Service Act 1999. The submission, titled Indigenous Values for the APS, was written in collaboration with other ANZSOG staff and the advice and contributions of senior Indigenous public servants and academics.

The paper recommends the following changes to the Public Service Act, which is the cultural foundation of the APS:
1.    Introduce a clause that recognises Aboriginal and Torres Strait Islander peoples as Traditional Custodians of the land now known as Australia, the first sovereign peoples to govern in Australia, and as colonised peoples of Australia.
2.    Introduce a new APS value of working relationally/collaboratively with all communities, including Indigenous communities, to develop policy, design services and develop strong and genuine partnerships.
3.    Introduce an “APS principles” clause which recognises service, merit, stewardship and relationality.
4.    Create greater accountability for Indigenous representation at senior levels.
5.    Create individual responsibility of agency heads to steward the partnership between Indigenous people and the public service, uphold the principle of relationality, and ensure there are strategies to recruit and retain Indigenous people at all levels of the APS.

These proposed changes recognise the impact of history and continuing colonisation on Indigenous peoples, but also the unique and powerful contribution Indigenous people can make to Australian governance. It recognises that Indigenous peoples have a worldview distinct from the West with unique values, obligations and behaviours—caring for Country, maintaining relationships, consensus decision-making, and a focus on process rather than product.

These values can improve the way the APS works with Indigenous communities and other communities as well. In particular, the value of working in a “relational” way recognises that the APS is embedded in a matrix of relationships with all the people and communities it serves. The relationship is not one way—with a magnanimous APS providing services to the polity—instead it is a two-way relationship where all parties have rights, obligations and responsibilities, as well as expectations of the other. If government can demonstrate it trusts its citizens and wants to work with them, trust will also start to flow the other way.

The APS submission emphasises that a commitment to a new relationship means working better now. None of the recommendations should be taken at face value and instead the APS should work with communities to co-create changes to the culture and values of the APS and the Public Service Act.

The journey towards a better relationship between governments and Indigenous communities is a long one. The New Zealand government is also on a similar journey, but further along in the process. Creating an APS that serves Aboriginal and Torres Strait Islander peoples takes time. But we need to start working towards a future where Indigenous knowledge, values and ways of doing are respected and embedded across Australian institutions, including public services. It is a future where Indigenous peoples are represented at all levels of the public service, and particularly as senior decision-makers in Indigenous Affairs. It is a future where young Aboriginal and Torres Strait Islander people want to join the public service because they know they will be respected and can make a difference. By truly recognising Indigenous peoples, understanding our values, and looking at new ways to work, the APS can significantly advance Indigenous wellbeing, improve its relationship with Aboriginal and Torres Strait Islander peoples, and develop better practices for engaging with all citizens.

Read more about the Indigenous Values for the APS submission, and learn more about ANZSOG’s Indigenous Affairs work at the ANZSOG website.