The Indian General Election results came in in May 2019 with a landslide victory for the BJP. In this blog post, Gaurav Jain discusses the potential issues surrounding voter anonymity in the elections. 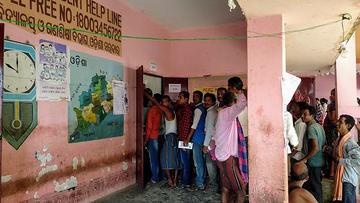 The Indian general elections are sometimes referred as the ‘Maha-Utsav’, meaning the ‘mega festival,’ because they are a major source of entertainment for the Indian population. The Indian election features the usual campaigning rallies and fights between different parties including insults and brickbats, unnatural coalitions, party splits and party swaps, but they can also include a lot of activities that could be classified as corruption. Corruption in Indian elections generally refers to incentivising voters with money, liquor or other gifts or alliances with leaders of voter groups (votebanks) in return for some benefits. All this could be reframed as means of clientelist linkages between politicians and voters. Yet there are more serious aspects to Indian elections than this, some of which can even include booth capturing and violence, though these have reduced from being a norm to an exception.

While traditionally most clientelist linkages are discreet, during the recent Indian general election campaign, people witnessed a very public display of clientelist linkage. During a public speech, a sitting Member of Parliament of the ruling Bharatiya Janata Party (BJP) mentioned the ‘ABCD formula’ for ranking villages based on how they vote for BJP. It should be noted this one of the senior most leaders in the BJP and has served as a cabinet Minister for Women and Child Development in the previous government.

The ‘ABCD formula’ is described in one of the speeches a few weeks before the elections  in the following words:

“We win in Pilibhit every time, so what is the parameter that we work more for one village and less for the other. The parameter is that we segregate all villages as A, B, C, and D ... The village where we get 80 per cent votes is A, the village in which we get 60 per cent is B, the village in which we get 50 per cent is C and the village where we get less than 50 per cent is D. The development work first happens in all A category villages. After work at A category regions is done, then comes B and only after work in B is done, we start with C. So, this is up to you whether you make it to A, B or C and no one should come in D because we all have come here to do good work.”

This is not the only veiled threat by parties in the election season; in the Western state of Gujarat there have been mentions by local candidates to rural populations that the government installed CCTV cameras in polling booths and would get to know each person’s vote. Such rhetoric not only places limitations on the level of public discourse, but it also instils fear of persecution in the voting public based on how they vote, as the denial of government support could be disastrous for many in rural India. While all this may seem like baseless threats, there is a reason why such threats were made.

The law provides every citizen with the right to secret ballot and mandates that there should be a polling booth within two kilometres of a voter’s residence. In rural areas and sparsely populated regions, there are polling booths corresponding to a village, a few households, or even a single person. Previously, to ensure the anonymity of the voter, the Election Commission used to mix ballots from multiple polling booths. This practice was abandoned on adoption of electronic voting machines (EVMs). Under the new system, any party could access the details of individuals registered at a polling booth and the votes cast to each candidate in any polling booth (Form 20) were both publicly available from the Election Commission of India. Coupled with feedback from polling booth workers (which each party positions outside the booth) on who voted and a slight idea of who the party’s staunchest supporters are, it was easy to estimate who voted for a given party. While this might not have been possible with the same accuracy in densely populated areas, in rural and sparsely populated areas, a political party could easily triangulate with precision (households, communities or villages level) who voted for them in elections. Especially in places like Malogam, which has only one voter registered at the polling booth – Sokela Tayang ,there is no right to secret ballot.

This is the reason why parties like BJP have been able to garner an overwhelming majority in number of seats without the majority in number of votes. BJP got 38% of total votes in the 2019 elections and won 303 seats out of 543 seats. There is no denying that there was a clear mandate towards BJP, but it was also a very successful turnout management by the workers of the party enabled through the understanding of everyone’s voting history. While these tactics have been used by almost every party,  what makes it particularly worrying is the kind of legitimacy garnered by the evolving narrative of open clientelist campaigns. As the narrative of rewarding those who vote in favour of a party and punishing others through policy measures garner more legitimacy, it forces people to make a choice. This can increases the polarisation in the society and set off a dangerous trend where this becomes the norm for all parties contesting election irrespective of their ideology.

*The views and opinions expressed in this article are those of the author and do not necessarily reflect the positions of the Building Integrity Programme.