Would you like to live in a world with zero pollution? The instinctive reaction is a big “Yes, of course!”… how could one even think otherwise?

The truth is, however, a little dismal – like most things economists say. There is a hidden premise in the answer above: “Yes, of course… as long as the costs of doing so are zero!”

Reducing pollution involves costs to society: if it is achieved through a fine on firms that pollute, those are given by such direct costs to firms in addition to indirect costs to workers: lower wages and/or unemployment, due to lower output in response to higher production costs. 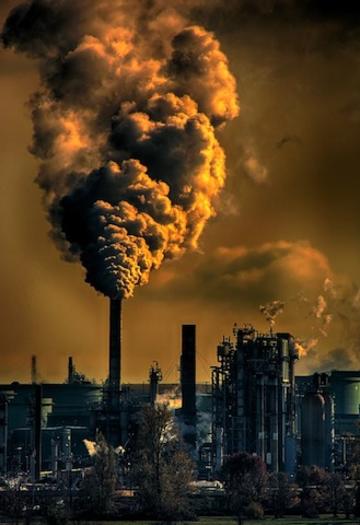 That optimal level could still be zero, in principle. In practice, however, this is unlikely – for a firm not to generate any residual from production is impossible with today’s technologies. Hence, unless we want a world where firms do not produce anything (and hence, with no income or consumption), we also do not want a world without pollution.

Society has come to accept that idea. The concept of carbon trading is that firms are allowed to emit CO2up to a certain cap. If they pollute above that cap, they can trade carbon credits with other firms to compensate emissions. Carbon trading creates incentives to reduce emissions – the most carbon-efficient firms not only pay lower or no fines, but can also get compensated. But it by no means enforces zero pollution.

To move in that direction, society had to form a consensus to treat different types of pollution differently. Consider a firm that purposefully throws waste in the river to avoid the costs of properly disposing of it. Society does not accept any level of that type of pollution. My guess is that the reason for the differential treatment is that the latter could always be fully avoided at some costs that do not make production infeasible (say, by paying another company to collect the waste and treat it or take it to a brownfield).

Nothing I have written so far is controversial. But what if I told you that the same conclusions should apply to corruption?

I can anticipate that the reader’s reaction is a mix of shock and disgust. After all, as Jim Kim, president of the World Bank, puts it: “Every dollar that a corrupt official or a corrupt business person puts in their pocket is a dollar stolen from a pregnant woman who needs health care. (…) In the developing world, corruption is public enemy number 1”.[1]How could that ever be good?

To see the why, let us go back to the pollution analogy. An entrepreneur that has to decide whether or not to build a new plant, for a fixed cost. If she builds the plant, she has to decide how much to pollute – not at all, a little or a lot. Since reducing pollution is costly, let us assume she would make negative profits if she were to produce while not to polluting at all. In that case, her best response would be not to produce, making no profits other than the fixed cost she has paid to set up the plant. If she were to pollute just a little, she would produce just a little as well, making low profits, and she could produce a lot and make high profits by polluting a lot.

This pattern (that production decreases with lower pollution) is consistent with that type of pollution society has come to understand cannot be eliminated. For environmental waste that could be eliminated at reasonable costs, such extreme logicshould notapply. With that in mind, society imposes a penalty if the entrepreneur pollutes, conditional on pollution levels.

What does the entrepreneur do? First, if the penalty is the same for all pollution levels, that is, if society treated all pollution equally, then low pollution would never make sense for the entrepreneur. Society would either have high pollution, or no pollution (and no production at all). Conversely, if the penalty is proportional to pollution levels, we would have a carbon tax that goes in the same direction as cap-and-trade. Even in that case, it is important to recognize that, for any penalty, some entrepreneurs never build the new plant, since there is variation in how much profits different businesses can make to produce the same quantities. Hence, any penalty kills some plants; there is always a social cost from punishing pollution.

Now let us turn to a local bureaucrat deciding whether or not to procure public goods, for a fixed cost (think of the costs of preparing terms of reference and making sure the competitive tender happens in full compliance with the guidelines).

Complying will all procurement guidelines required to make auditors content is a costly process. It is reasonable to assume that those costs are lower for vendors (with higher-qualified staff and specialized knowledge on what they sell). Corruption often emerges from a bargaining process that starts with a vendor helping a bureaucrat bear the costs of preparing documentation for a competitive tender, through which goods or services will be procured. In doing so, the requirements of those goods or services can be can distorted such as to favor that vendor in the competitive process, and/or public resources can be misallocated through over-invoicing once the goods or services have been rendered, as a quid-pro-quo for the vendor’s help earlier on.

Without vendor’s help, the bureaucrat may decide to take the risk of preparing the procurement process herself, or, alternatively, might decide not to procure at all, depending on a cost-benefit analysis which accounts for (1) the share of the surplus no longer captured if the bureaucrat is not corrupt, and (2) the possibility that the bureaucrat may be framed as corrupt even if she is not. This is so because the costs of perfect compliance are so high that, even when she does not intentionally rig the competitive tender, there is still a positive probability that auditors are not content.

With that, we are ready to resume the analogy. If the bureaucrat procures, he has to decide how much help to request from vendors – which, given the previous discussion, ultimately corresponds to deciding how much corruption to have in the contract – none, a little or a lot. Since reducing corruption is costly (as he will have to prepare the procurement process without vendors’ help), let us assume he would face a negative payoff if he were to execute the budgeted resources with no corruption at all. In that case, his best response would be to not to spend at all, facing no payoff. If she were to allow for just a little corruption, she would spend just a little as well, facing a low payoff, and she could spend a lot and face a high payoff by allowing for high corruption.

Analogously to pollution, for embezzlement that could be eliminated at reasonable costs – politicians raising campaign contributions in exchange for favoring bidders later on, or police selling weapons to drug dealers –, such extreme logic should not apply.

Is corruption in procurement contracts ran by local bureaucrats different? I would argue that it is. It cannot be reduced at reasonable costs – public goods provision would be significantly reduced without it. In fact, my study with Marcos Lopes, Marcelo Medeiros and Gustavo Fernandes (“Is Corruption Good for Your Health?”) shows that Brazil’s random audits program, designed to decrease specifically that type of corruption, has decreased Health spending by at least 30%, making municipal health ouputs and outcomes significantly worse.

Having established the parallel, the conclusions apply symmetrically. What does the bureaucrat do? First, if the penalty is the same for all corruption levels, that is, if society treated all corruption equally, then low corruption would never make sense for the bureaucrat. Society would either have high corruption, or no corruption (and no spending at all). This is consistent with the evidence I point out above.

Conversely, if the penalty is proportional to corruption levels, we would have a corruption tax that goes in the same direction as cap-and-trade. Even in that case, it is important to recognize that, for any penalty, some bureaucrats never run procurement, since there is variation in how help different bureaucrats need to procure the same goods. Hence, any penalty kills some spending; there is always a social cost from punishing corruption.

Note: The views and opinions expressed in this article are those of the authors and do not necessarily reflect the positions of the Building Integrity Programme.